The Waipuilani Gulch Wetlands are a prime example of what happens when water flows mauka to makai. The gulch is located in the Moku of Kula (Kihei), in the watershed of Hapapa, and the Ahupua’a of Waiohuli. The Waipuilani Gulch has its outlet at Waipuilani park at the Waipuilani Kai wetlands (next to Luana Kai condominium). These wetlands and riparian areas (kahawai) are located on the Kihei floodplain and share the aquifer with multiple muliwai wetlands. The closest neighbors are the Waiohuli Kai wetland, and the Kulanihakoi wetlands. Our “Kahawai” are the streams, gulches, and riverbeds where water flows. These areas are providing essential wetlands services that are vital for flood mitigation. There are already flooding issues in this area, but these can be made a lot worse if developers take away any more natural watershed infrastructure.

Wetlands in Context: When you look at a wetland you have to view it in the context of its entire surrounding watershed and position in the landscape. The wetland itself is just one feature of that larger watershed. It is one link in the chain of features that manages the flow of water. The watersheds were known to ancient Hawaiians as Ahupua’a, and they delineated the boundaries of their land-use system. Each Ahupua’a constituted the land from mauka to makai, and managed the waters flowing through the kahawai (gulches and streambeds). In Kula Kai, there are several Loko I’a (fishponds) positioned across the stream mouths of each gulch/ahupua’a.

The Waipuilani gulch services a large watershed. The Waiohuli gulch’s and Waipuilani gulch catchment area, aka “Piilani Basin” is mauka of Piilani highway. All of that rainwater falling upcountry flows downslope towards the ocean descends rapidly gaining energy.

Rainfall becomes stormwater: This rainwater flows across the landscape, eroding stream banks, and picking up debris, dirt, silt, and other contaminants along the way. This rainwater, now becomes contaminated stormwater, is progressively diverted into the narrow gulch. This stormwater then flows under the highway through a 100-foot-wide concrete culvert bridge at Piilani Highway where it is further accelerated. High flow rates reported here can be equal to some significant rivers when it rains. According to the Kihei Drainage Master Plan (KDMP) the “Q100” hundred-year-storm is forecast to send 8,750 CFS (cubic feet per second) through here. This is equivalent to 6-7 olympic-sized swimming pools full of water flowing every minute.

This is called a flash flood. Flash floods can come quickly from remote rainfall and can suddenly appear on the lower slopes and can pack a punch and catch people off guard. When this fast-moving floodwater flowing down the gulch hits the floodplain, it slows down, loses energy, and spreads out in the widening part of the streambed. This wide area of the lower gulch is an area known locally as Fong’s gulch. 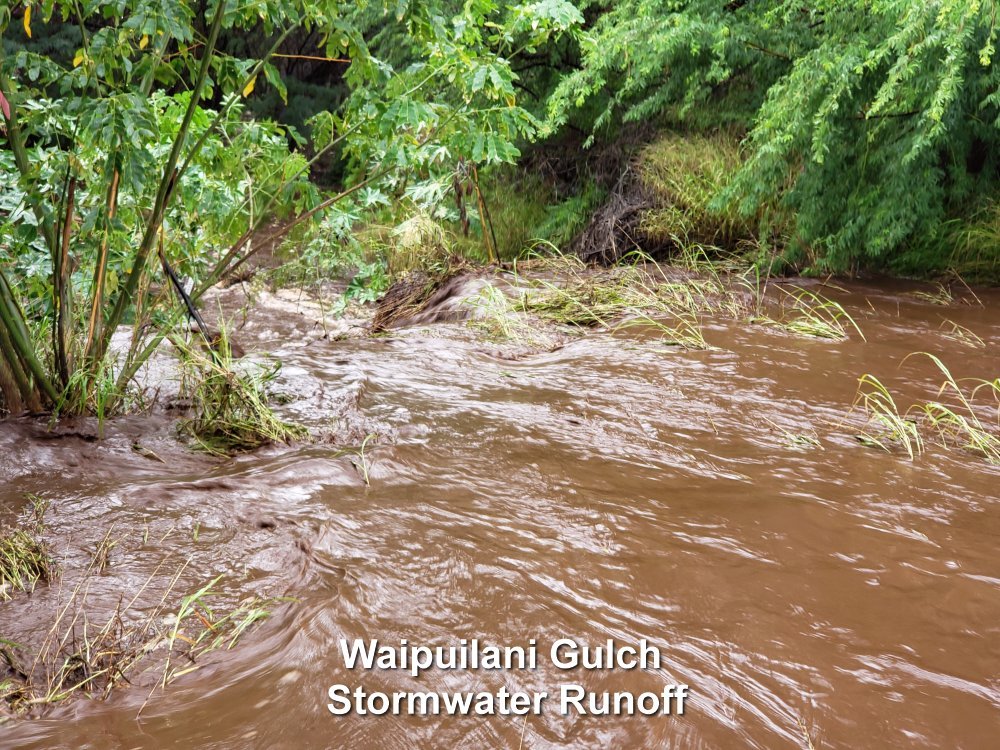 This area regularly becomes inundated and during rains can become covered in a foot or more of surface water. This part of the gulch is the widest part of the riparian area of the streambed on the floodplain between Piilani Highway and South Kihei Road. This wide part of the gulch acts as the area’s de facto drainage detention basin.

Detention Basin: The total estimated capacity of the stormwater detained in a 12.8-acre site like this could be in the range of 4 million gallons, even if it is just 1 foot deep. This stormwater usually contains many tons of silt and soil coming in stormwater from upcountry. This stormwater also contains many other unhealthy or undesirable contaminants, such as bacteria and nutrients as well. If the flow of the stormwater is allowed to slow down enough, in this de facto detention basin, the silt and soil suspended in the stormwater will settle out onto the ground. Most of the pollutants are attached to the soils and are also removed from the water reaching the ocean.

Porous Soils: The soils here are particularly adept at allowing the passage of vast quantities of water, down into the aquifer. However, if the amount of stormwater exceeds a certain limit, excess water will continue to flow seaward overland and push through a narrow opening at the base of the gulch.

Canyonized Streambed: The narrowing of the gulch was caused by several housing developments which were built right into the stream bed here. The stormwater flowing down this narrowed “canyonized” streambed will accelerate, then flow under South Kihei road through a single narrow “con-span” culvert. This is culvert one of the most notorious bottlenecks in the Waipuilani Gulch watershed. In the photo below, fast-flowing floodwater from Waipuilani Gulch backs up at the South Kihei Road culvert. 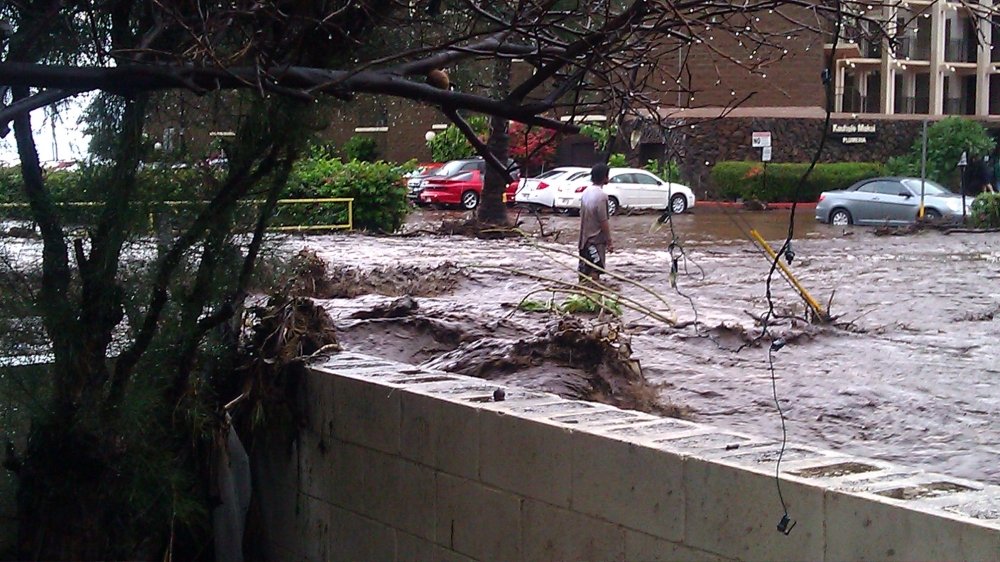 This constriction has been the cause of many flooding events in recent times and has caused problems for residents and for motorists as stormwater floods nearby roadways.

The Waipuilani gulch wetlands and riparian areas are doing their best to handle floodwaters, but they are increasingly under pressure to handle more stormwater as nearby developments surrounding it created more impervious surfaces that increase surface runoff and stormwater production. In addition to the increasing amount of stormwater, the massive amounts of silt transmitted downslope tend to fill up the gulch and reduce the wetland’s holding capacity. 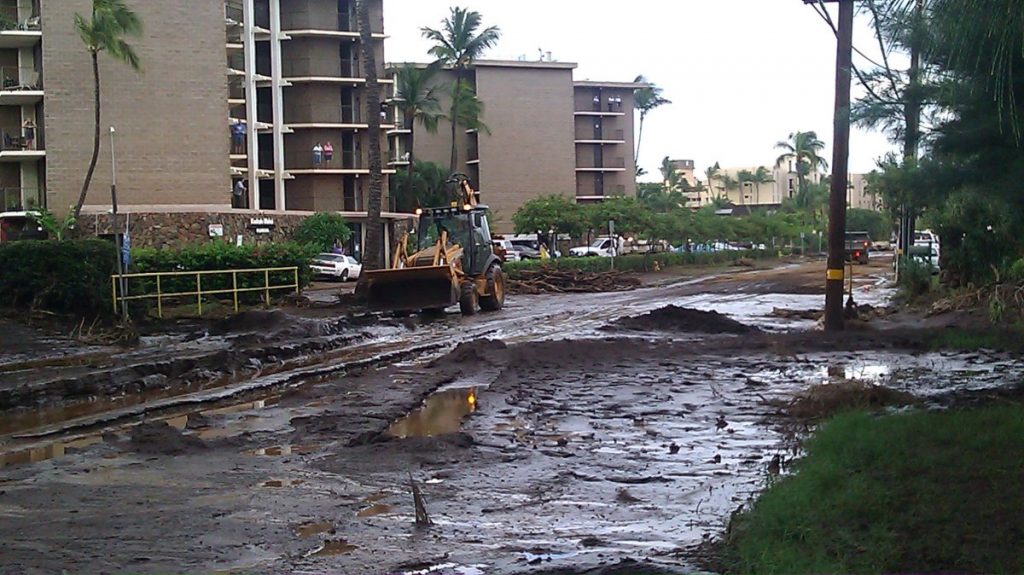 More Development is planned in this Gulch. This wetland and its riparian areas are under the threat of destruction by development. The proposed plans would place houses in this flood-prone gulch, and would channelize the streambed, in a way that would increase coastal flooding, and transport the contaminated floodwaters directly into the ocean. Without the filtering abilities of the Waipuilani Wetlands, the nearshore coral reefs with be damaged by the increased amount of silt-bearing contaminated stormwater reaching the ocean.

Cultural Sites: Adjacent to this wetland is the historical David Malo church that was said to be built on the banks of perennial freshwater pools here (which no longer exist today). Excavations near this site revealed a long cycle of inland freshwater pools punctuated by flooding events. Hawaiian settlements are believed to have been located along this gulch to take advantage of the favorable conditions of the wetland. The foreshore area also supported a large settlement as well as being the site for another Royal fishpond at the mouth of this gulch. The Waiohuli Kai fishpond stands at the mouth of this stream and was the one of major engineering infrastructure accomplishments of the Hawaiian settlements here.