Severe stormwater events in South Maui can be characterized as mud floods. Not only are there vast amounts of stormwater flowing in each storm, but there are also thousands of tons of mud being transported down the mountain.

Degraded ranchlands contribute vast amounts of dirt/soil and debris into floodwaters. Degraded upcountry ranchlands have loose soil and no ground cover due to overgrazing by domestic and feral ungulates. Including Cattle, Pigs, Sheep, Goats, and Deer. These ranchlands are located in the catchment areas of the upper watershed. When rain falls on these dry, dusty, areas, water quickly runs off and carries away vast amounts of soil. This stormwater sheets off the land and carries a slurry of dirt and debris into streams and gulches.

Each storm can potentially bring thousands of tons of upcountry “mauka mud” down the mountain, and after storms, this mud needs to be removed from the gulches and floodplains, otherwise, it increases flooding problems in neighborhoods, on roads, and/or flows into the ocean where it harms coral reefs.

This is not normal. Our roads should not become flooded and filled with mud every time it rains. But it happens so frequently lately that local residents are becoming desensitized to it. The State and County need to fix these problems because they are making the residential neighborhoods hazardous, the transport infrastructure vulnerable, and the environment, including coral reefs, being destroyed. 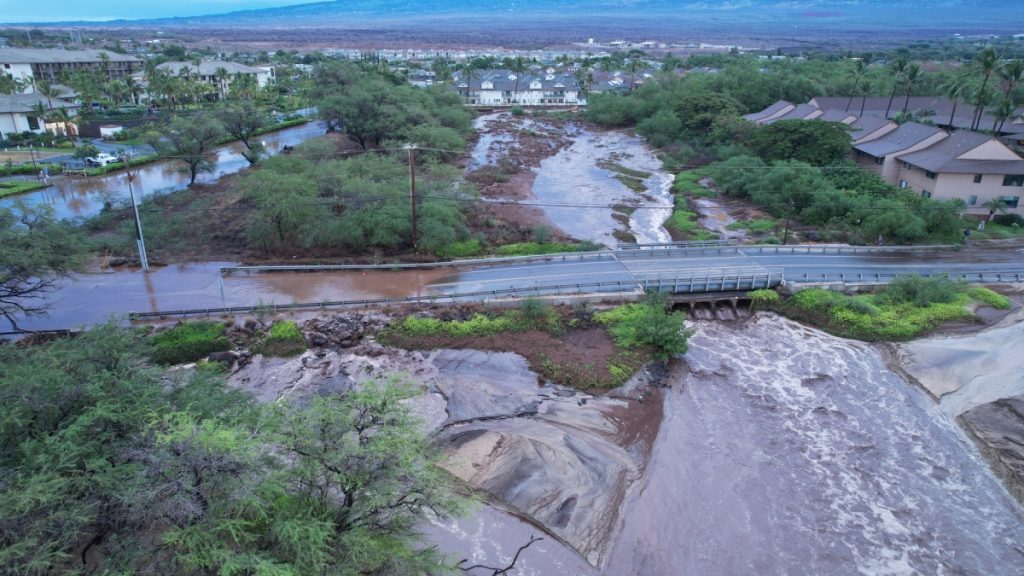 Road Closures and Transport problems: Flooding causes road closures and disruptions to transport systems, The access of vehicles is blocked, and hazardous conditions occur. traffic and travelers are at risk when the roads begin to flood, cars can become incapacitated and cars can get stuck in fast-flowing waters, Cars can float away or block roads for other traffic, and situations occur where people need to be evacuated from stalled vehicles. pedestrian access is also blocked, and emergency vehicles also have a hard time accessing these areas. Flooding on South Kihei Road creates traffic problems for all of South Maui because it is only one of two, main roads that service the entire district.

Here is the County Flood hazard map showing the flood zones that flow through Monsanto. The upper one is the Keahuaiwi stream that flows into Kealia Pond, and the lower stream is the Waiakoa stream that flows past Suda’s to the Kihei Pier.

Degraded Ranchlands: Upcountry ranchlands occupy the vast majority of the Watershed’s upslope catchment areas. Years of overgrazing, plant loss, invasive vegetation, and impacts from both domesticated and feral ungulates (Ungulates = hooved animals like sheep, pigs, goats, deer, cows, and horses), have caused the soils to become destabilized which allows them to be washed away.  Soils in upcountry ranchlands have lost their ability to absorb water, which increases runoff, and exacerbates stormwater problems.

Erosion in Grazing Land. “Sheet erosion and gullying also occur in land that has been overgrazed. The forage plants are destroyed or have no chance to spread or to ripen seed and, as a result, the surface of the soil is left bare. Sheet erosion is inevitable, and advanced stages of sheet erosion produce innumerable gullies. In addition, the cattle trails during storms become water courses and then gullies”. (source: https://www.ctahr.hawaii.edu/oc/freepubs/pdf/EB1-11.pdf)

“Unfenced riparian zones are grazed by livestock and provide hidden trails used by deer and other feral ungulates. As a result, vegetation is grazed and trampled and soil is loosened; this contributes to unstable stream banks and causes erosion and sediment-laden stormwater during runoff events”. (Michael Reyes. 2019. Southwest Maui Watershed Management Plan: County of Maui).

Mud and Siltation are destroying streams and wetlands: The impacts of mud floods and siltation on natural streams, and wetlands can not be underestimated. natural wetlands are natural “mud-catchers” and catch and filter sediment and mud, but too much mud can overwhelm them. Massive amounts of mud change the way that the water flows through wetlands systems, streams, and gulches, This often diverts the natural flow, and can sometimes cause streams to jump out of their beds and flow laterally into surrounding neighborhoods. This in itself is a natural response to the overaccumulation of silt in a watercourse, but it is problematic when housing and neighborhoods have been built into these flood-prone areas, and historical flood plains. 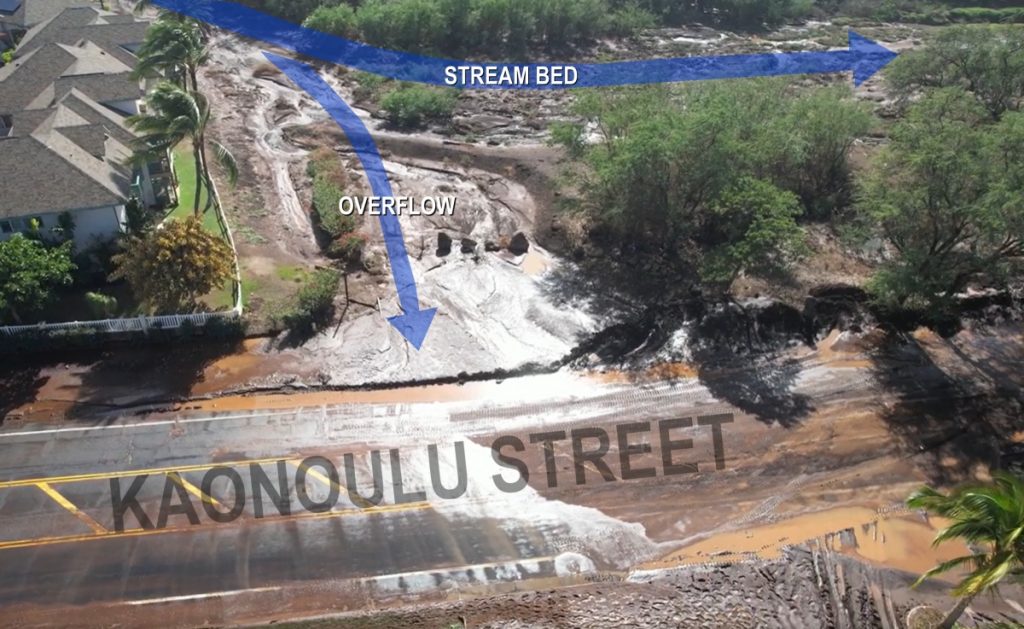 Severe stormwater events in South Maui can be characterized as mud floods because they often involve large amounts of water flowing over the land surface, which can pick up and carry large quantities of sediment and mud. This sediment and mud can then be transported downstream and deposited on floodplains or in other low-lying areas, causing damage to vegetation, infrastructure, and water quality.

Erosion Injures Others: “The loss of the topsoil from a farm injures not only the farmer, but it also injures the entire community. The soil that is washed off the farmland is taken down into the lowlands, and, as the stream loses its force, the soil is dropped here and there, doing great damage”. (source: https://www.ctahr.hawaii.edu/oc/freepubs/pdf/EB1-11.pdf)

SILTATION AFFECTS OCEAN AND REEFS: “Sediment-laden stormwater increases turbidity. High turbidity conditions can be caused by sediment-laden water discharging from freshwater streams and/or from the resuspension of sediment caused by tidal or wave action within coastal waters. Increased sedimentation and nutrient loading on the extensive offshore reef complex threaten the health of the reef ecosystem. Sediments deposited by one storm event can be subsequently re-suspended”. (Michael Reyes. 2019. Southwest Maui Watershed Management Plan: County of Maui).

Reef’s impacted up to 100km from Shore: “Recent studies have demonstrated that increases in sediment discharges from watersheds associated with poor land-use practices can impact reefs over 100 km from shore, and that ecosystem-based management efforts that integrate sustainable activities on land, while maintaining the quality of coastal waters and benthic habitat conditions, are critically needed if coral reefs are to persist” (Richmond, et al., 2007).