Ephemeral Wetlands and Natural Detention areas: Coastal wetlands appear all along the coastline along Kīhei’s extensive floodplain. The flat areas are bordered by shoreline sand dunes that form a natural detention basin. Floodwaters flowing from mauka to makai (mountains to the sea) will flow into these low-lying areas and spread out sideways. This action slows the flow of the stormwater “de-energizing it” and allows the sediment in the water to settle out, and the remaining water is gradually absorbed into the ground and passes through the sandy sub-soil before entering the ocean.

These events create “ephemeral” or temporary wetlands and expand the usual footprint of the wetlands for a time. These areas are known to be subject to flooding and have been a wetland area for hundreds of years, long before any urban development.

WAIPUILANI WETLAND: This area once contained many permanent freshwater lagoons that were used for bathing. This area also once supported a large fishing and agricultural community. Today much of this area is now a large shoreline reserve covered with a lawn made up of introduced foreign species of grass, but some of the areas in this reserve still have native plants, thanks to restoration and conservation efforts. 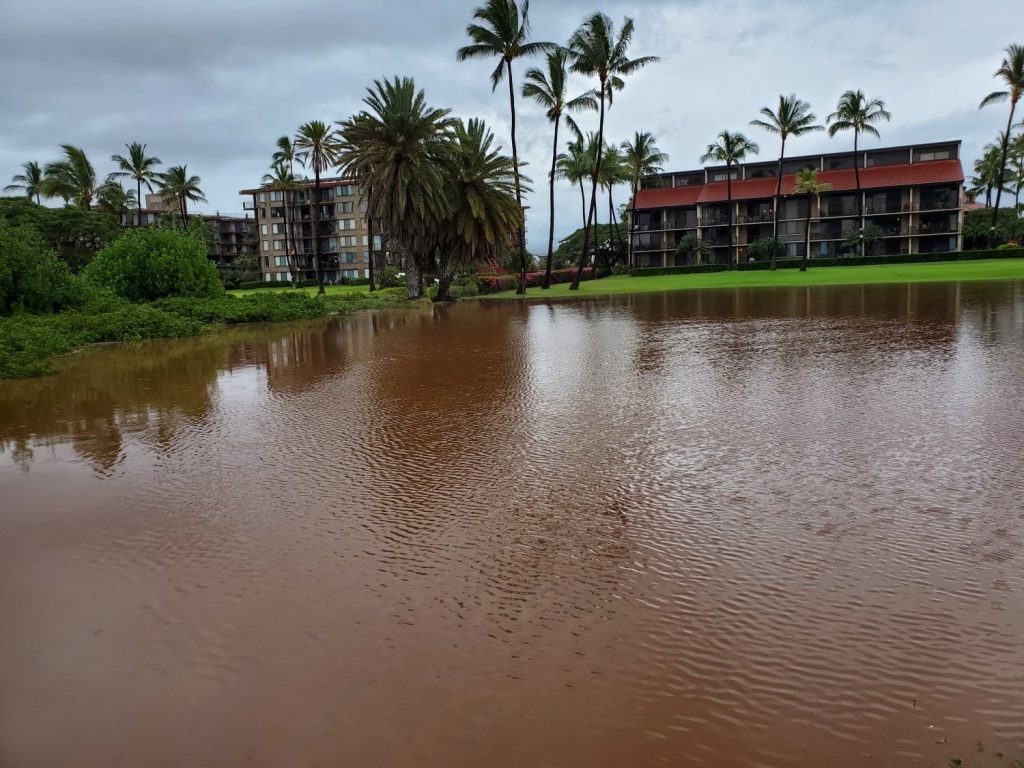 Floodwaters spread across the floodplain at Waipuilani park. These open spaces on the margins of the wetlands are buffer zones that allow for the temporary expansion of wetlands during high rainfall events. As nature intended, this greatly expands the surface area and capacity of the wetland to hold vast amounts of floodwater. Several hydrophilic plant species thrive in this environment including mangrove and other wetland species, adapted to salt tolerance and periodic flooding.

Shoreline dunes and sandbars: At the shoreline, the sand dunes stop the water flowing directly into the ocean, and this results in the water sometimes backing up into surrounding areas. The county sometimes deems it necessary to break open the sand plugs to allow water to drain out to make the water level drop. But this should only be done in cases of extreme flooding where life and property are at risk. It is illegal to remove them at other times. Sandbars occur naturally at the mouth of streams and help protect the ocean from land-based pollution by settling and filtering the water before it enters the ocean.

After the sand dune was broken, the water quickly drained into the ocean. Sadly, this contaminated stormwater is very unhealthy for the coral reef and marine life. This is why wherever possible it is essential to manage most of the stormwater on land, to prevent the pollution from it reaching the ocean. 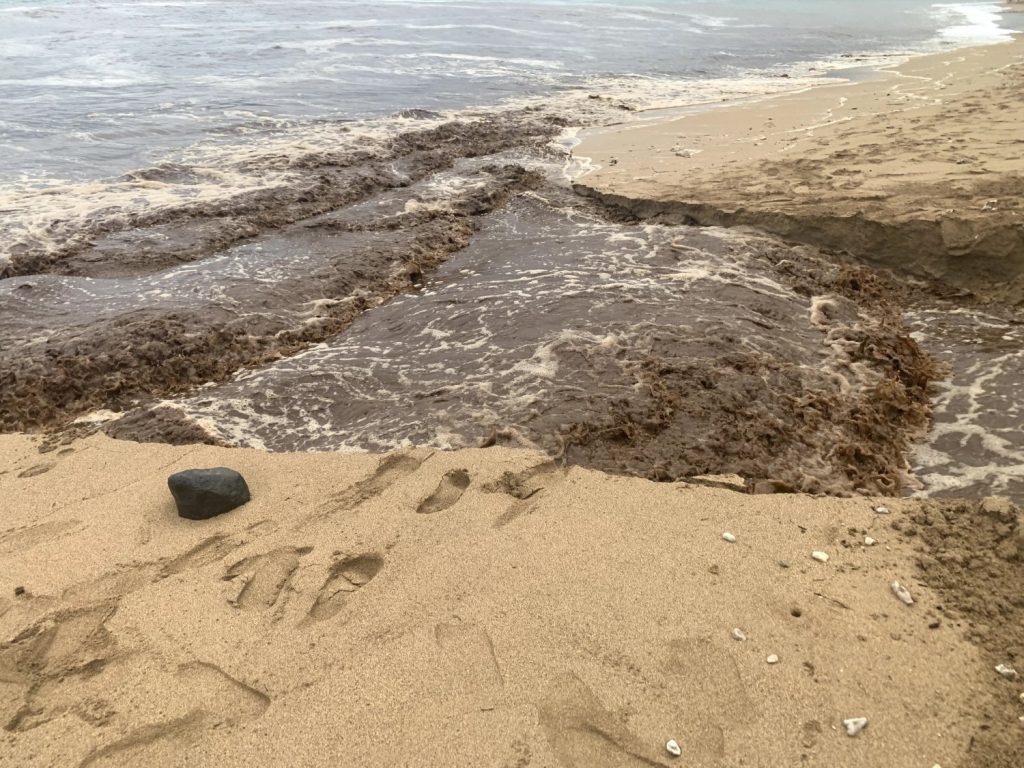 Dead and dying sea-life will often wash ashore for days after brown-water events.

Damage to the shoreline, sand dune, and ocean: This photo was taken after the dune was deliberately broken and the lagoon was drained into the ocean. A great deal of sand and sediment was dumped into the ocean. You can see that the sand dune was undercut and scoured up to a depth of at least 5 feet at the sides and about 25 feet wide. It is probable that many tons of contaminated material needlessly entered the ocean from this single event. This damage was not caused by nature, it was man-made.

Brown water Events: When contaminated stormwater enters the ocean it is called “Brownwater”. The brownwater is very unhealthy not only for the ocean, sea life, and coral reef, but also for humans as well as it usually contains chemicals, pathogens, sewerage, and diseases. People should not swim for at least three days after rains, and not consume any fish or seafood caught in brownwater conditions. The silt in the brownwater eventually settles, and sometimes smothers coral and other invertebrates, then after several days the water usually appears to become clearer, but the silt remains on the seafloor long after the event and can be stirred up and recirculated when there are waves and swell. This creates turbidity (cloudiness) in the water which continues to harm the reef life.

Unfortunately, the role of a functioning wetland is not widely understood. The wetlands form a natural barrier and a filtering system that protects the ocean from contaminated stormwater runoff. There needs to be more education and regulation to allow wetlands to function effectively to provide their maximum benefits.

The Waipuilani Kai wetland is a perennial wetland with permanent water that is fed from underground springs.  It is part of a much larger hydrolic system that extends from the mountaintops to the ocean. Water is constantly flowing into the ocean and is most visible at these places. In the photo below, the muliwai is within the deepest part of its streambed, but during rains and floods, this wetlands expands laterally across this back beach area to form ephemeral pools. This entire seen area in the foreground is the buffer zones and true footprint of the wetland system.

Where the Waipuilani wetlands meet the ocean. In this photo, you are standing on the beach looking east. There is a narrow strip of sand on the sandbar that protects the stream from the ocean, and the ocean from the stream. This is a naturally occurring part of the wetland estuary system.

Wetland Services: If we lose any more of our wetlands and open spaces, gulches, and floodplains, we also lose our drainage infrastructures. Then we also lose all the essential services that the provide. Flooding will become worse, and more contaminated floodwater will reach the ocean, harming coral reefs and fish-stocks. and other marine life.

Wetland Restoration and maintenance: We rely heavily on our wetlands being in functioning condition. So, it is essential that we maintain and restore our muliwai (springs, wetland, estuaries) and Kahawai (riparian areas, streams, and gulches), to their fully functioning conditions.