Maui has 12 districts called Moku. Each Moku functioned as a large land unit, and each Moku was controlled by a chief. Our project site is in the Moku of Kula in south-west Maui. 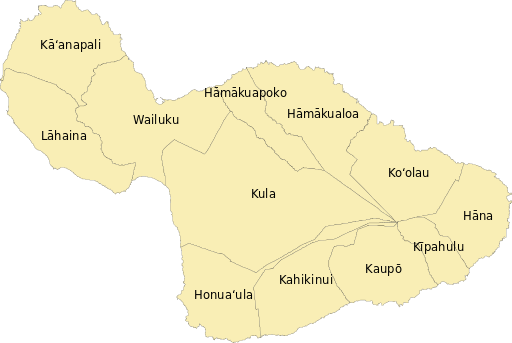 On Maui there are 141 Ahupua’a. Each Ahupua’a is a land division that runs from the highlands to the sea, generally in a wedge shape, they make have narrower widths on the upslope/uphill (mauka) side, and then widen out closer to the shoreline. (although some ahupua’a vary from the classic idealized wedge-shape).

Ahupua’a generally follow the hydrology of natural valleys and their borders follow the ridgelines that separate the valleys. Each Ahupua’a has at least one stream bed that runs along the floor of the ahupua’a. Permanent (perennial) or temporary (ephemeral) streams may run along these gulches and stream beds.

In Kula-Kai, the current climate that we know today is dry, and also being located on the leeward side of Haleakala, the average rainfall here is much lower than the on the windward side. In former times however, the forested highlands cooled the climate more than today and a wetter climate likely prevailed. So, the drier streambeds we see today could have easily flowed with water.

These days, water still flows in these streams, although much of it flows underground along subsurface pathways. This groundwater makes its way to the sea where it empties out in underwater springs under the ocean.

In many places where the groundwater breaks the surface, springs appear, and these springs sometimes form pools and wetlands. Many of these freshwater pools are still seen today in the form of wetlands of various types. Some of these are little more than muddy bogs, or saturated soil. Yet many of these will change seasonally and vary with passing rainfall. But there are also some persistent water bodies that have perennial (permanent) surface water and support abundant plant and animal life.

These permanent springs and wetlands form a special habitat that creates an environmental niche in the ecosystem. Many highly adapted species of birds for example depend on these wetlands to survive.

Kula Kai is special: The area we call Kihei today was known in former times as Kula Kai. “Kula” because it is in the Moku of Kula, and “Kai” because it is on the ocean side. In this area, there are several ahupua’a that each has a stream, a gulch, and associated wetlands. As a testament to this, ancient Hawaiians built their settlements on the banks of these streams, and freshwater pools, and they exploited these natural wetlands for their agriculture. They also modified the wetland landscape to creating Loi kalo (taro patches) and Loko I’a (fishponds). In Kula Kai there ae at least four stunning wall type Loko i’a that were built for the benefit of royalty.

You can easily imagine that in former times a wetter climate created an abundance of freshwater pools, springs, and ponds. There were large settlements here, and productive aquaculture growing and harvesting fish and other food products. What is also worth mentioning is that these Hawaiian architects studied nature and appreciated natural features. This is why they located their settlements in this area and built around these natural wetlands and streams.

Later on, they modified these natural features to improve the benefits. For example, widening streambeds to make lo’i kalo, and Lo’i i’a, as well as creating the large nearshore stone-walled fishponds.  The fact that Hawaiians built their ahupua’a and agricultural systems around theses streams and wetlands, makes the wetlands of today, sites not only natural beauty, but also of cultural and archeological significance. It is not uncommon to find ancient archeological features such as heiau (temples) in and around the wetlands and streambeds in Kula Kai.