The wetlands at Welakahao are some of the largest remaining open green space wetlands in Kula Kai. These wetlands provide valuable services the surrounding neighborhoods. Welakahao provides a link between the upcountry catchment area, Keokea stream gulch, the floodplain, and ultimately the ocean.

The Welakahao wetland is located in the Moku of Kula (Kihei), in the watershed of Hapapa, and the Ahupua’a of Keokea. It sits within the Keokea Gulch, and has its outlet into two neighboring wetlands La’ie-Mauka, and Halama. This wetland is located on the Kihei floodplain and shares the aquifer with multiple muliwai (wetlands). It is part of a larger group of muliwai that include, La’ie-Makai, La’ie-mauka, and Halama.

All the water moving from Mauka to makai flows through over and under this wetland. This wetland is also adjacent to several other sites that are part of a larger combined system. Stormwater from neighboring roads, and developments is diverted into this gulch, and this wetland is tasked to handle this runoff. We have seen during large flooding events the true extent to which these wetlands contain and manage the water. Millions of gallons of contaminated stormwater are detained and absorbed by these wetlands and prevented from reaching the ocean. 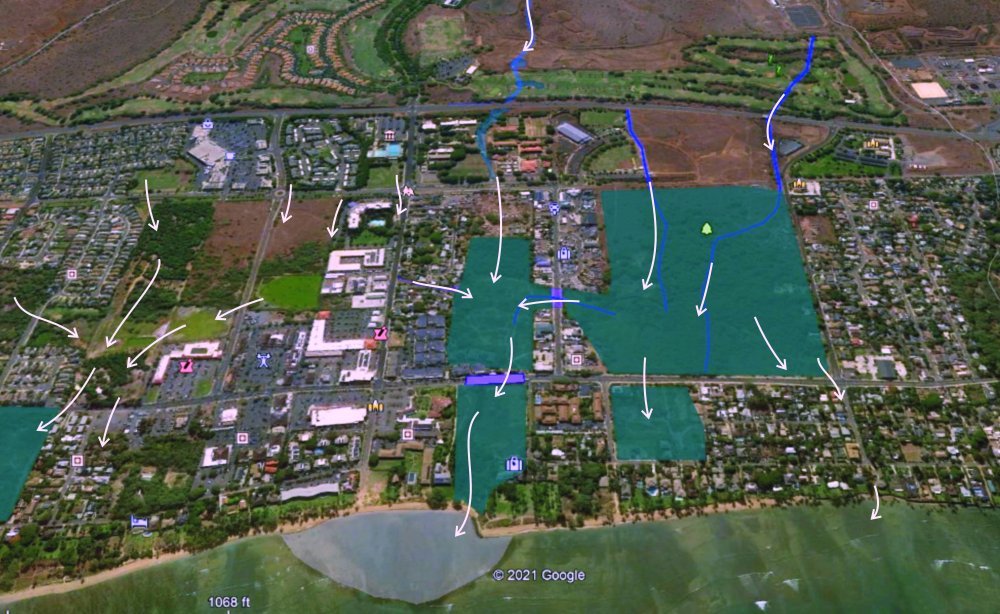 Nearby neighborhoods were built into the same wetland, and they also experience periodic flooding however, this flooding would be significantly worse without the services provided by the wetland. Purely from a drainage infrastructure standpoint, these wetlands provide a vital service. These areas have almost no other existing drainage infrastructure.

These wetlands are performing many beneficial functions that are often taken for granted. These wetlands also occupy strategic locations within the watershed geology and topography that gives then the ability to intercept and modify water flow. All water flowing mauka to makai impacts these wetlands. And as development occurs around them runoff increases and the burden on their services increase.

Cultural Values: This area is part of a mauka to makai area that have been used by cultural practitioners for generations for hunting, gathering, recreation purposes. The integrity of this site is important to its ability to continue to be used for these purposes.

Welakahao Kai: In addition to several overland outlets, Welakahao also has many underground nexus (connections)  to underground streams that lead to the ocean. In addition to these Welakahao also has a kahawai (stream) that leads directly to the ocean. At the shoreline this kahawai becomes a muliwai (wetland, estuary) that is continuously fed by spring water. This stream has been improved with some “grey infrastructure” (concrete), but is still a functional wetland.  This small kahawai also becomes the areas only stormwater outlet when it rains. This tiny area provides the only direct drainage service for hundreds of homes in this neighborhood.

Proposed development: The group known as “Na Kahawai O Kula Kai”, meaning “the waters of Kula Kai,” raised concerns about impacts of a proposed development to the wetland, stream flow and cultural practices. Vernon Kalanikau a member of that group, said his connections to the area go back as far as the 1500s and that his family’s lineage is descended from Kiha, son of Chief Piilani and Princess La’ielohelohe; Kekaulike, king of Maui; Kalola, daughter of Kekaulike; and Keopuolani, considered the most sacred wife of King Kamehameha I.  “That water is the water of Kane, and the water of Kane gotta reach the ocean, the kai,” said Kalanikau, president of Na Kahawai. “It’s all part of the circle of life. Water from the top comes down to the bottom, goes to the ocean, clouds do its thing. If you cut that circle of life . . . then there’s no chance of restoration of the shorelines.”